Poor Stacy Swanson is bored, used to her rich ,
glamorous life of travel and parties prior to
college – I can sympathize being at the time a
frequent traveler to the ten minute away petting
zoo and local Woolcos , she feels restless and
decides, for a lark, to answer an ad for a campus
job helping out a graduate student, work on his
grant. And well the title Teacher’s Pet and the
glowing illustration by renowned artist ( in the
teen series circle ) James Mathewuse just
about sums up where that story heads. Of
course it’s complicated by the fact that the
foursome of the title roommates are contemplating
going their separate ways ( don’t you just love
when a series threatens to bust up the very
thing the series hinges on in the title – like
when the BSC gets into a fight and wants
to break up the club – or now I’ve heard
the Sweet Valley High update on the twins
won’t even take place in Sweet Valley – insanity! ) ,
not to mention Stacy already has a boyfriend
though he’s the type, though as understanding
as he is, isn’t as cosmopolitan as she’d like
preferring cheeseburgers to calamari. The
graduate is one of those standard brainy ,
preppy types – horned rimmed glasses ,
Italian loafers with no socks – like Jeff
Goldblum imitating Don Johnson! One of
Stacy’s outfits is a white linen camp shirt ,
a slim blue skirt and white , flat gladiator
sandals my jaw like dropped reading it –
finally! After going months spotting these
ridiculous sandals make a comeback I
finally found a legitimate spotting in a teen
series. 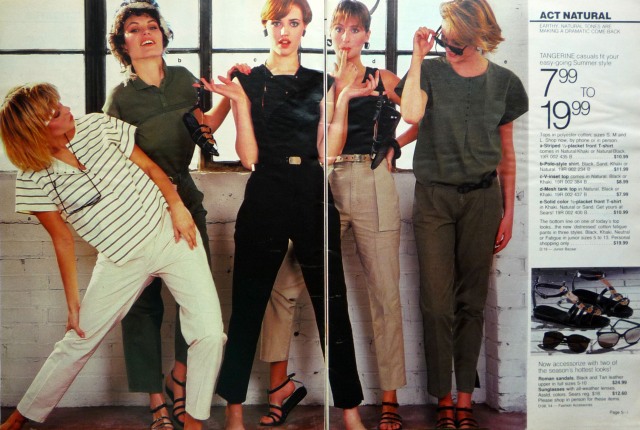 Now I’m not completely fashion
backward, they are kinda cool – but okay
it’s just funny to remember their roots – The
80’s had this halting Egyptian revival that
just kinda sputtered up in places – they even
tried out gladiator skirts for men – pul-lease.
Of course it didn’t help when the Bangles
sang , Walk Like an Egyptian , Madonna
coveted Nefertiti earrings in Desperately
Seeking Susan, and Mannequin featured
an Egyptian mummy reincarnated within the
flexible confines of the title object. Mainly
the only lasting Egyptian looks were the
gladiator sandals , gold lame bandeau’s
( speaking of which Roni the Roommates
resident wild child wears one in the book
paired with black harem pants – dubbed
‘the typical Roni dazzle.’)
, linen sarongs , and gold arm bands oh and
those Cleopatra page boys that were
basically more known for being the Linda Evans cut.

Back to Stacy and Carter Cabbott – she smooths
her mini skirt and he says nice lines – but dirty
minded Stacy assumes he means her of course
he doesn’t, he likes her sculptures – Stacy was
doing the pottery thing way before Demi Moore
made it cool in Ghost. He sweeps her off her
feet by ordering Italian dishes in Italian
( written in italics ) and the author, sympathetic
to there readers who still order Happy meals,
describes what they are eating. I don’t know,
Stacy’s offer of tacos and an old Elvis movie
from her boyfriend sounded more appetizing.
Of course as the story progresses – greasy
tacos would’ve been less hassle. As Stacy
falls head over heels for the questionable
Carter who asks her to sneak into an office
and take a file ( which he says is his ) yeah
right. She breaks up with taco-boy Pete
and tries telling her mother Sydney and
yes with a trendy name like that she’s a
posh flake how in loooove she is.
Oh and if you want to know
what some of the title roommates do
inbetween Stacy’s ahem romance , they- watch
guys play glow-in-the-dark frisbee at night ,
gossip in the school cafeteria ( pretty much
like any high school book ) and push all
their furniture aside to wheeze through
an aerobics tape. By now the reader
should guess Carter is a rotten , vile ,
snake, in the Bruce Patman mold. And
he is – using Stacy to steal his ex
girlfriend’s material so that he can
use it to earn his grant money.
When Stacy finally clues in
she pretends to her friends that she
isn’t bothered one bit and has to go
for a drive to cry – she meets up with
good ole’ boy Pete who accepts her
back and as happy endings go this one
takes the cake with the girls realizing
they don’t want to go separate ways
it was a misunderstanding. The final
party takes place not in a posh restaurant
but the graffiti stained , beer stained Beta
house, television room where the girls
guzzle champagne and munch pizza.
Another fine lesson in light lit –
don’t be dazzled by Italian dishes ( err this
could go for the guy or the food. )
Domestic’s just fine. 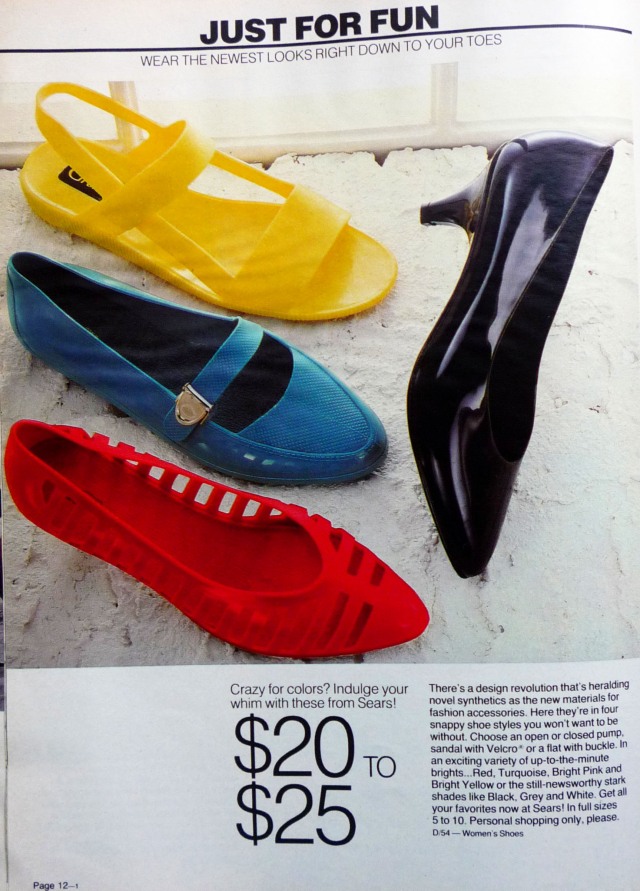 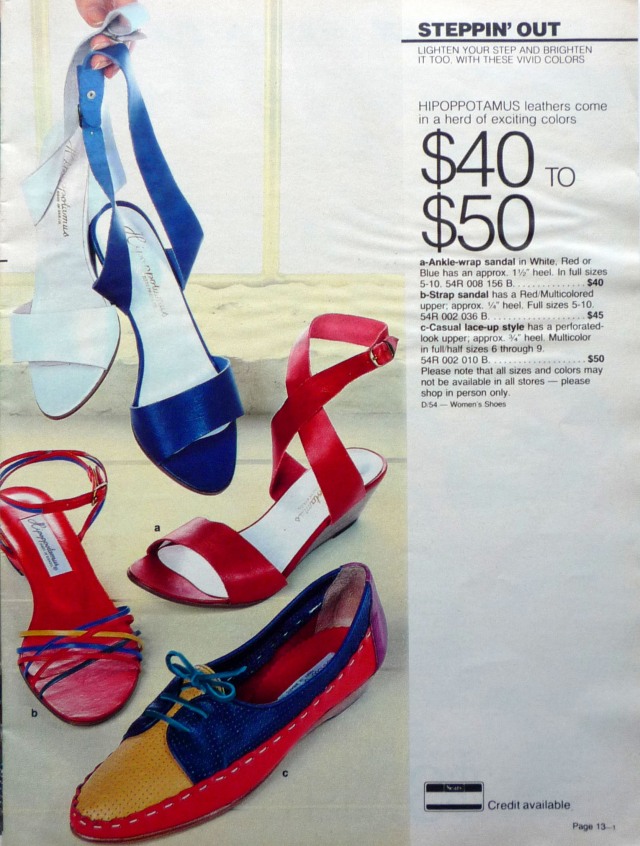 Reading about Stacy in college I
latched onto the gladiator sandal thing and
searched through my collection of magazines
to find something but just recently I bought
this huge stack of old magazines and stuck
inbetween some copies of Woman’s Day was
an old Sears flyer mini catalogue that they
used to put out in spring ( I don’t know if
they still do that now ) anyway there was
a great ad where the models literally had
roman sandals dangling from their fingertips –
how cool is that! Instead of just leaving it
with two pic’s I decided the following pages
of accessories were just too brilliant and don’t
you just adore the title blazing – Knock ‘em dead
dazzle?! It’s a visual feast for 80’s mad nostalgia
nuts – windowpane mesh scarfs , star earrings ,
straw hats ( eat your heart out Alexis Colby ) ,
ballerina lace up sandals and fashionable jellies!
Hope you love the pics as much as I do.